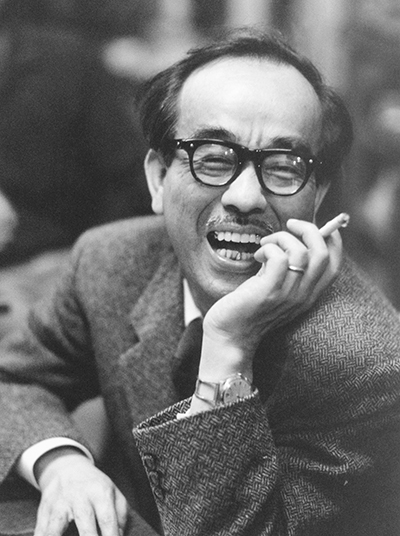 Kazuo Kikuta was a boy who was an apprentice in Kansai and was aiming to be a poet. In 1925, he came up to Tokyo and became a disciple of Hachiro Sato.
In 1930, a play of his first work "Aho Gishi Meimei Den" at Asakusa Tamaki Theatre was very popular. After that, he was active as a playwright. He wrote numerous comedies for both Kenichi Enomoto (Enoken) and Roppa Furukawa (Roppa) and others.
In 1936 he was invited to Roppa Furukawa Theater, who belonged to Toho, and became its author, and the theater moved its base from Asakusa to Hibiya. It is said that Roppa's move from Asakusa to Hibiya is to raise its comedy quality, but existence of Kazuo Kikuta's plays weighed a lot. "Hanasaku Minato" is one of his masterpieces played roles of swindlers by Roppa and Atsushi Watanabe.
Shortly after the war, NHK Radio's series dramas, "A hill with bell ringing" and "What is your name", screenplay by Kazuo Kikuta and music by Yuji Koseki, enjoyed a huge popularity.

In 1945, immediately after the end of World War Two, at the theater entertainment in Hibiya area was "Tokyo Takarazuka Theater", "Yurakuza", "Teigeki", "Nichigeki", and in a confusion after the war, all staff members got fired up with "At last the theaters will restart!". However, only Tokyo Takarazuka Theater was taken over to GHQ and became an Ernie Pile Theater exclusively for the Allied Forces.
After ten years have passed since January 1955, Tokyo Takarazuka Theater was finally returned. As a result, the founder of Toho Co., Ltd., Ichizo Kobayashi, welcomed Kazuo Kikuta as a theatrical director of Toho Co., Ltd.
In his first script after becoming an executive, he wrote "Toho Comedy" but Ichizo Kobayashi erased "comedy" with a red pencil and corrected it to "Musical". Here, the name "Toho Musical" was born.