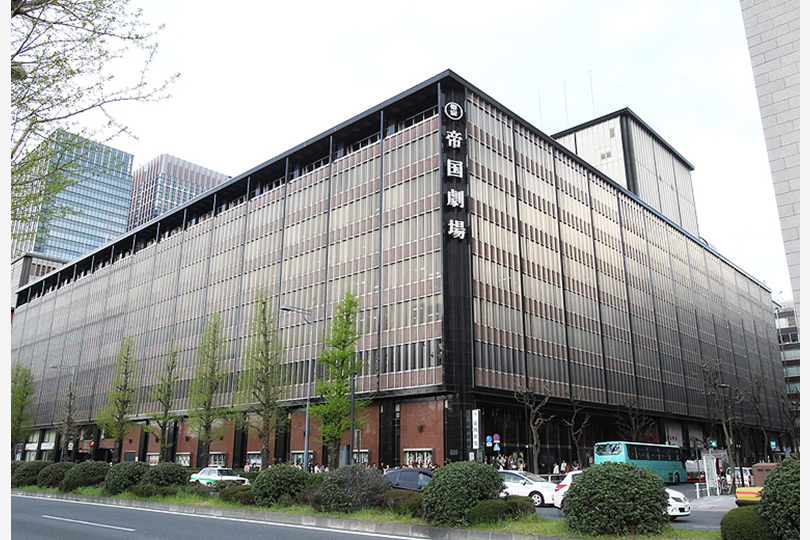 As the first Western-style theater in Japan, the Imperial Theater continues to play a pivotal role in the cultural landscape of Tokyo. The theater is located in the Marunouchi district, facing the Imperial Palace. The opulent and impressive interior of this building is something marvelous to behold as soon as you enter the building. The lobby is lush with an abundance of red carpet and several artworks decorating the space. A light installation by Inokuma Genichiro (1902–1992) stands at the foot of the staircase, and four masks by Hongo Shin (1905–1980) decorate one side of the wall. However, what catches attention is the beautiful stained-glass made by Inokuma. The theater also boasts advanced stage technology that includes six underground floors of revolving stages that can be raised and lowered with hydraulic power. The whole theater is designed such that different sets can be taken down and changed within a minute.

The Imperial Theater produces a wide variety of performances every year, including Western musicals such as Les Misérables, Elisabeth, The Man of La Mancha, and Miss Saigon, as well as spectacular shows by Japanese entertainers such as King & Prince – Johnny’s Island. The auditorium can accommodate up to 1,900 people, while the ninth floor houses an art museum with a rotating exhibition.

The Imperial Theater, also known as Teikoku Gekijo, is Japan’s first Western-style theater. The original four-story building was designed in a Renaissance style by Yokogawa Tamisuke (1864–1945), a renowned architect and founder of Yokogawa Electric Co. Yokogawa spent time in the U.S. and the West studying theater design, and modeled the theater after famous opera houses in Europe. Its construction was prompted by a growing movement that wanted to raise the standard of theater in Japan. Prominent and influential people during the Meiji period (1868–1912) were aware of the importance of the modern theater and were eager to adopt the Western way of construction. The plan to establish a new theater in Tokyo was first conceived in 1906 by former Prime Minister Ito Hirobumi and by Shibusawa Eiichi, a prominent businessman. Soon after, Shibusawa approached many influential people of the time, who were all eager to open a new theater. This culminated in the establishment of the Imperial Theater Corporation in 1907. Yokogawa, the architect and designer, was appointed to develop a venue that would showcase traditional Japanese performance arts, especially kabuki, in a modern theater.

On March 1, 1911, the theater opened with a grand ceremony. However, just over a decade after its opening, the theater was partially destroyed by a fire following the Great Kanto Earthquake that struck the region on September 1, 1923. The theater was soon rebuilt in 1924, but it would undergo several more changes, including a change of management amidst the economic depression from the early Showa period to World War II.

In 1964, the Imperial Theater was closed due to the aging of the edifice. It took two and a half years to finish reconstruction, and it was reopened in September 1966 as a new theater, which still stands today. The present version was designed by Taniguchi Yoshiro, the father of Taniguchi Yoshio, who re-designed the Museum of Modern Art in New York in 2004.

Since its first opening, the Imperial Theater has played a very significant role in modernizing theater and theater management in Japan. For example, the theater introduced a new ticket system in which tickets sales opened ten days prior to the performance. The theater also prohibited eating, drinking, and smoking inside the auditorium, instead building a lounge and dining hall inside the building. The Imperial Theater also fostered other types of performance art in Japan, including opera and ballet. For a while, it had its own opera company. The theater also invited foreign theaters, opera and ballet companies to come and perform. Finally, the Imperial Theater provided a cosmopolitan cultural atmosphere that, at the time, could not be found anywhere else in Tokyo.

Performances being performed or scheduled at Imperial Theatre

Western-style theater for the first time in Japan, the Imperial Theater, realizing the dream of modernization of prominent figures in the Meiji period
01 Jun 2018