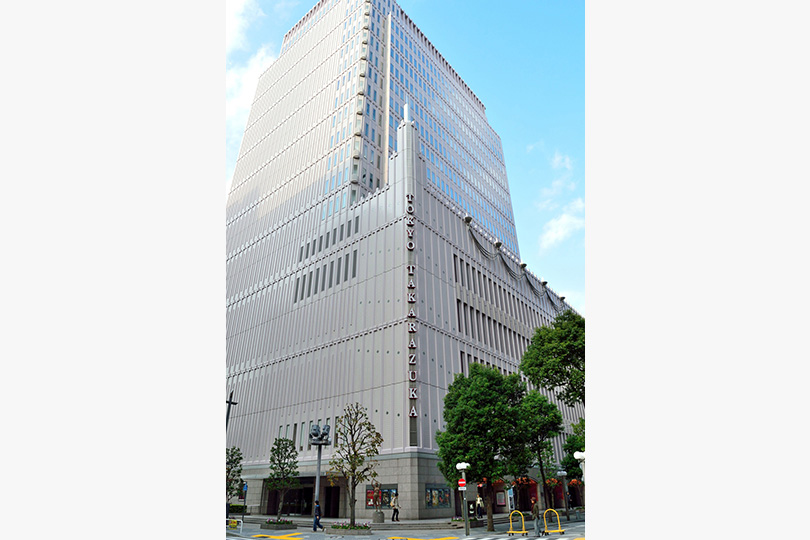 For over a century, the all-female theater troupe Takarazuka Revue has been entertaining audiences in Japan. The troupe’s performances are a mix of Western-style musicals, French cabaret, and high-kicking precision dancing and are characterized by elaborately choreographed numbers and over-the-top costumes with glitter and feathers. Takarazuka Revue has a huge and dedicated fanbase across Japan, particularly with women, who make up the majority of its audiences.

In 1913, the founder and president of Hankyu Railway Co., Kobayashi Ichizo (1873–1957), created the Takarazuka Revue Company to attract more visitors to Takarazuka in the prefecture of Hyogo. On April 1st, 1914, the group held their first performance with an all-female cast, a direct contrast to kabuki and noh plays that were performed exclusively by men. The troupe was a huge success and held its first Tokyo show in 1918 to huge acclaim. The following year, Kobayashi founded the Takarazuka Music Opera School, now called simply the Takarazuka Music School, to supply his company with performers. As has been the practice since its founding, girls from fifteen to eighteen years of age with dreams of becoming a Takarazuka Revue performer have to pass an audition to attend the school, and then undergo years of rigorous training before they can finally take to the stage.

Such was the group’s popularity that it opened its own venue, the Takarazuka Grand Theater, in 1924. This venue was followed by the Tokyo Takarazuka Theater, which was established in the capital’s Hibiya district on January 1st, 1934. The opening of the theaters was a huge milestone for the company, as the theaters offered permanent venues for all its performances rather than the rented theaters they had been performing in. Both Takarazuka theaters continue to attract visitors today. After World War II, the Tokyo Takarazuka Theater was renamed the Ernie Pyle Theater and was managed by the Allied Powers. During this period, the Takarazuka Revue had to again perform in rented venues across the city until 1955 when the theater reverted to its original name and the troupe took to its stage once more. The original building was demolished in 1998 due to disrepair, and the troupe’s current building, constructed on the same site, opened in 2001.

The new Tokyo Takarazuka Theater, with its red carpets, brilliant chandeliers, and a famous grand staircase, is an icon of Japanese theater. The auditorium has 2,065 seats and is designed so that spectators can enjoy a great view from any seat in the house. The stage has the same set-up as does the Takarazuka Grand Theater in Hyogo, where new shows debut before transferring to the capital a few weeks later. Musicals, revues, and plays are performed one or two times a day to packed houses. The majority of Takarazuka works are adaptations of classic Western musicals, operas, plays, novels, or films. Takarazuka also occasionally performs interpretations of Shoujo manga or Japanese folktales.

Because of its uniquely imaginative and dream-like performances, Takarazuka is extremely popular and tickets sell out quickly. The theater is located in the heart of Hibiya, Tokyo’s theater district, directly beside the Imperial Hotel. It is a five-minute walk from the Hibiya Station.

In 2019, the all-female Takarazuka Revue is celebrating its 105th anniversary. Takarazuka was created in 1914, when Japan was experiencing a growing interest in Western-style theater, which was unlike the traditional forms of Japanese theater. Kobayashi Ichizo (1873–1957) took this opportunity to create a new form of entertainment that combined song, dance, and drama. The original Takarazuka Revue was heavily influenced by French theater and American Broadway musicals. In 1927, the group’s Mon Paris became the first revue staged in Japan. It became the model for Takarazuka performances and introduced a different kind of performance, including high-kicking dance routines similar to those of New York’s Rockettes, which remain the group’s hallmark. Takarazuka Revue’s fame has spread beyond Japan, and the troupe frequently tours internationally to Europe, Asia, and North America.

Today the company has approximately four hundred performers in five troupes: Flower (Hana), Moon (Tsuki), Snow (Yuki), Star (Hoshi), and Cosmos (Sora). In addition, there is the “Superior Members” (Senka) group, who are part of the four hundred corps members and consist of experienced upperclassmen. They are not affiliated with any of the troupes, rather providing special performances and appearing in any of the troupe’s productions as needed. Every Takarazuka performance starts with a play that lasts for about one and a half hours, and in which every character is played by multiple women regardless of identity as the male lead (otokoyaku) or female lead (musumeyaku). This performance is followed by a short intermission after which spectators are treated to a musical cabaret with bright lights, live orchestra, and a show-stopping, eye-high-kicking dance performance.

Takarazuka has a profound influence in the Japanese entertainment industry, and many former Takarazuka actresses have moved into television and movies after they graduate from the Takarazuka Revue.

After World War II, the General Headquarters (GHQ) of the Supreme Commander for the Allied Powers took over the management of Tokyo Takarazuka Theater and renamed it the Ernie Pyle Theater after the Pulitzer Prize–winning American journalist, who died in Okinawa in 1945. During this period, the Takarazuka Revue Company performed at rented venues such as Nippon Gekijo and Imperial Theater. In 1955, Kobayashi Ichizo (1873–1957) regained management of the venue and changed the name back to Tokyo Takarazuka Theater.

Performances being performed or scheduled at TOKYO TAKARAZUKA THEATER