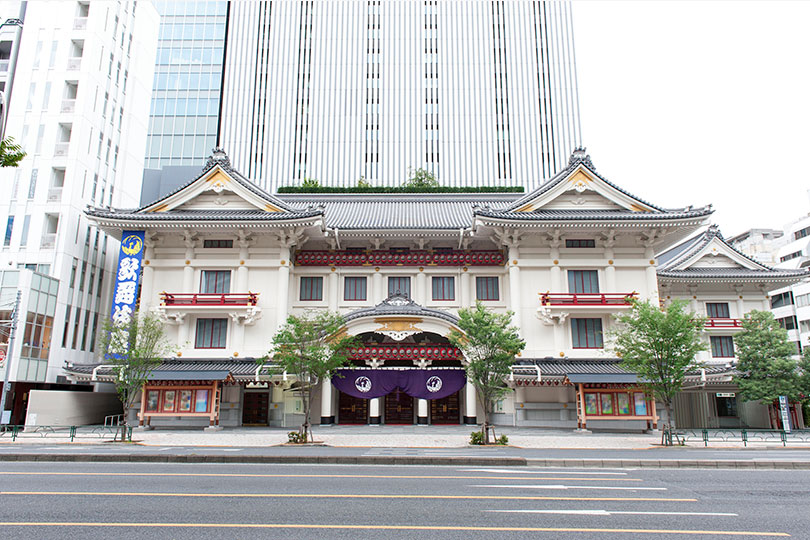 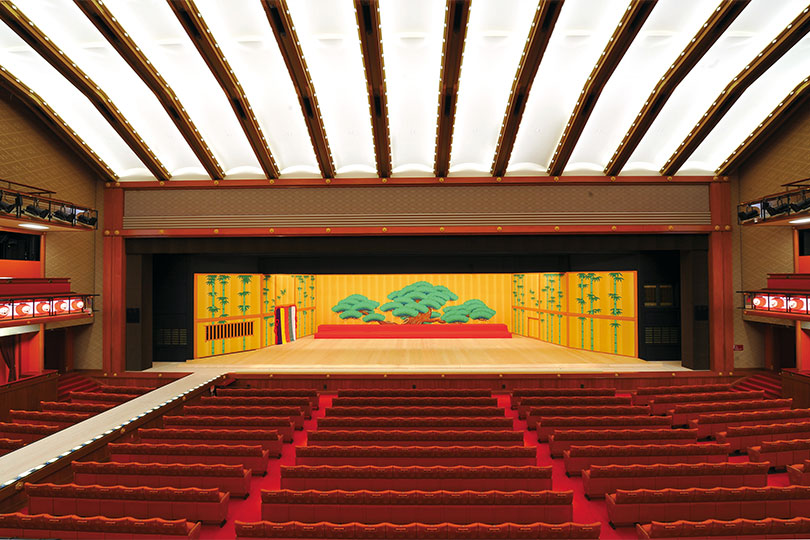 One of the most well-known traditional performing arts in Japan, kabuki is an intriguing, multi-faceted theater performance that traces its origins back to the sixteenth and seventeenth centuries. Looking at its male-dominated form now, it is important to remember that kabuki was originally pioneered by female performers, but their involvement was outlawed in the early seventeenth century when it was deemed too provocative. Today, female roles are still performed by men.

A few characteristics make kabuki distinct from other Japanese performance art. Most prominently, the actors don full-face makeup (kumadori) and elaborate costumes. This makes kabuki Japanese theater at its most physical, with heavily stylized and exaggerated movements. Kabuki plays are based on traditional texts and literature: some regale audiences with tales of the glory of the ruling samurai class back in the day, while others are based on the lives of everyday folk.

The Kabukiza Theater in Ginza is an icon of kabuki, with frequent performances that change in program on a monthly basis. It also features a permanent interactive exhibition where you can learn about this UNESCO-recognized enduring art form. Don’t miss the shopping center on the second basement floor, where you’ll find a variety of kabuki-related gifts and souvenirs.

It is easier to decipher what kabuki is when you look at the three individual kanji characters that make up its name: “Ka” (歌) refers to the music, “bu” (舞) highlights the dance while “ki” (伎) means “acting.” Simply put, this traditional Japanese theater is a form of dance-drama, in which the actors don elaborate costumes and full-face makeup (known as kumadori) and perform stylized and exaggerated movements.

Kabuki has been performed for almost as long as Shakespearean theater. But while Shakespearean theater started with men taking all the roles, kabuki went the other way. It was originally performed by women back in the 16th and 17th centuries, but due to what officials saw as kabuki’s sensuous and provocative nature, women were banned from performing in 1629 and the men took over. This tradition persists today; male actors playing the same sex are called tachiyaku while those who play female roles are referred to as onnagata. The musicians and the kuroko—near invisible stagehands dressed all in black—complete the ensemble.

Throughout its four century-long history, kabuki has not only incorporated fashion references of the times but also borrowed from other traditional performing arts such as noh and bunraku puppet theatre. This willingness to evolve and adapt has resulted in kabuki having an eclectic and interesting style, which adds to its enduring appeal. In 2008, UNESCO officially recognized kabuki as an Intangible Cultural Heritage of Humanity.

More recently, Japan has seen the emergence of an innovative style of kabuki known as “super kabuki.” This new interpretation seeks to broaden kabuki’s appeal by using modern-day Japanese language and adapting classic storylines to fit in with today’s contemporary culture.

A distinguished landmark in Ginza, the storied Kabukiza Theatre is a Tokyo institution. Opened in 1889, it is the largest kabuki theater in Japan and the only one that’s fully dedicated to the kabuki tradition. This majestic building has gone through several transformations, the latest of which, completed in 2013, saw a makeover by renowned Japanese architect Kuma Kengo. Architecturally, it is an icon, showcasing the building styles from two distinctive periods in Japanese history, namely Nara (600–794) and Momoyama (late sixteenth century).

It is safe to say that Kabukiza Theatre is the most significant building in the kabuki world. The regal, expansive theater is adorned with classic Japanese motifs and designs. There are regular seats spread out over three floors, along with box seats, plus a fourth floor reserved for those watching just a single act at a discounted price. Kabukiza Theatre has also made it easier for non-Japanese speakers to enjoy the show by renting out a translation device that provides commentary, background, and plot explanation in English.

However, Kabukiza Theatre is more than just a show venue. There is a restaurant on-site serving meals during intermission (reservations required), and for visitors who are not catching a performance, they can still shop for kabuki-related souvenirs and memorabilia on the second basement floor as well as the fifth floor of the adjacent Kabuki Tower. Moreover, there’s the interactive Kabukiza Gallery featuring sets, costumes, and props that visitors can touch and play with. Just outside the gallery is the scenic rooftop garden, which looks out to the modern skyline of Ginza

While the opera-like noh theater was largely associated with the nobility, kabuki emerged as the theater of the people. There are two types of kabuki plays: more formal jidaimono based on historical events that often tell tales of the ruling samurai class, and sewamono, stories that revolve around everyday folk, with themes such as romance and moral conflict taking center stage.

In the past, a kabuki performance sometimes stretched on to become a full day’s entertainment, with patrons coming and going as they pleased. These days, a show is usually around four hours; it consists of a few acts with several short intermissions plus a longer meal break lasting about 30 minutes.

One distinctive characteristic of kabuki theater is that actors sometimes break through the fourth wall to address the crowd directly. Similarly, audience members can yell out the actors’ names as a form of encouragement, known as oomukou. Needless to say, a kabuki show is always lively, and the staging plays a role in enabling this immersive experience. The elevated pathway that extends from the stage into the audience, known as the hanamachi and unique to kabuki, often blurs the line between the performers and the spectators. This, coupled with interesting props and stage features including trap doors and false walls, results in an engaging show that is historically rich and visually captivating.

Performances being performed or scheduled at Kabukiza Theatre

Welcome to Kabukiza Theatre! The performance is held three times a day in August!
20 Jul 2018