Welcome to Kabukiza Theatre! The performance is held three times a day in August! 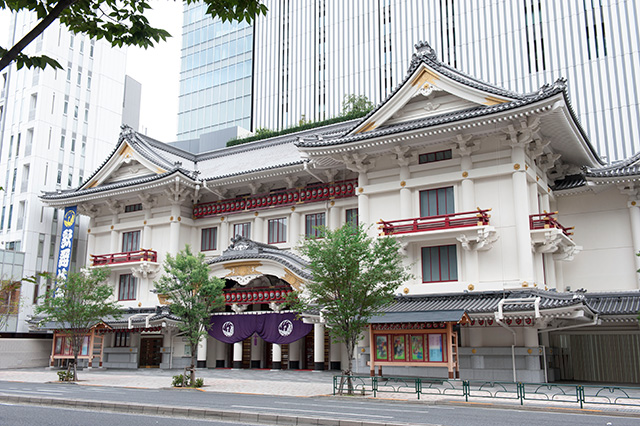 Kabuki performance is held three times a day at Kabukiza Theatre in August (from August 9 to August 27).
Kabuki performance in August at Kabukiza Theatre is known as a stage to challenge the classic masterpieces and new works of kabuki casting mainly on young star generation since 1990. Also, since 1993, by performing three times a day, each performing time becomes shorter than usual a day and night system, which is easier to watch for even workers and foreigners. We are looking forward to your visit while you stay in Tokyo. 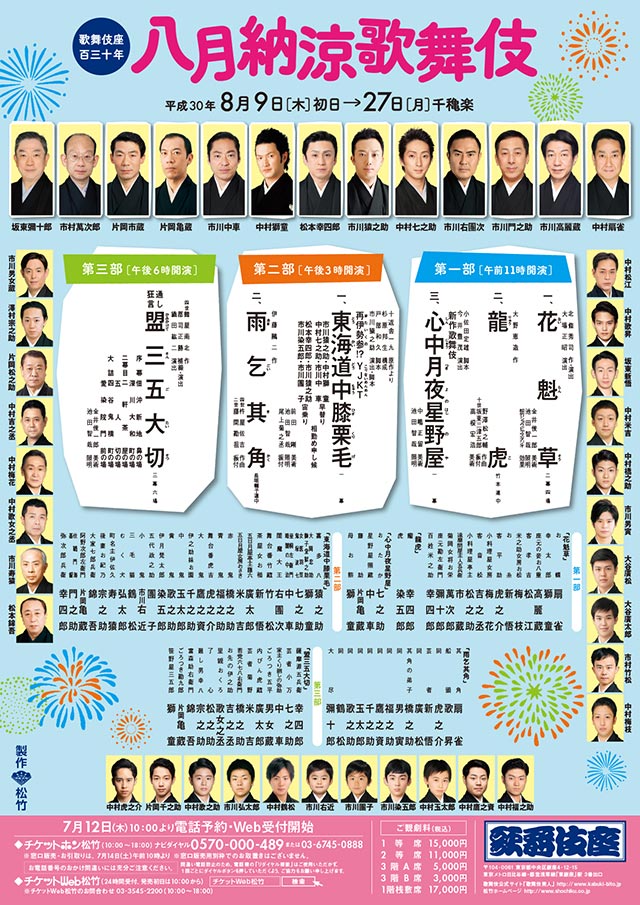 Part 1 (Start at 11:00 AM)
'Oiranso' - Theater
Kotaro, a Kabuki-actor and Ocho, a prostitute, who survived the massive earthquake were rescued by a farmer and begin living together in the countryside. Ocho loves Kotaro, but she cannot make up her mind. Kotaro will return to Edo to pursue his career as an actor with support from others, and he is to go to Edo...

'Ryuko' - Japanese dance
A dragon, the ruler of the heavens and a tiger, the conqueror of the earth fight with their long hair erecting, but the dragon and the tiger leave without deciding the winner or loser. It is a brave Japanese dance with full of variety.

'Shinju Tsukiyo no Hoshinoya' - Theater
Otaka, a former geisha, was told about breaking up by Teruzo, who sells vegetables and is troubled with money, and promises by chance to commit a lovers’ double suicide. However, there was Otaka's mother's wisdom, and only Teruzo jumped off a bridge... It is a funny play based on the story of Rakugo (a storytelling since the Edo period).

Part 2 (Start at 3:00 PM)
'Tokai Dochu Hizakurige' - Theater
Yajirobe and Kitahachi are main protagonists of 'Tokai Dochu Hizakurige', a comedy travel story representing the Edo period. Many incidents happened to their journey through Japan, which is still very popular story and has been made into many works such as kabuki, movie and drama. This time, Yaji and Kita makes a strange trip on the way to go to Ise Shrine.

'Amagoi Kikaku' - Japanese dance
Early summer with continuous dry weather. When Kikaku, a haiku poet, floats a boat on the Sumida River, his disciples come to inform their recent droughts. Kikaku composes a haiku poem praying for rain, then rain falls at once. It is a Japanese dance that makes us feel summer of the Edo period.

Part 3 (Start at 6:00 PM)
'Kamikakete Sango Taisetsu' - Theater
Satsuma Gengobe loves Geisha Koman, but Koman has a husband named Sangoro Sasanoya. Gengobe, a former samurai, takes responsibility for the loss of public money and tries to wait and see an opportunity to recover his reputation. However, Gengobe is cheated the money his relatives prepared by Sangro and his wife. It is kabuki that depicts humans in a real way.

August at the Kabukiza Theatre