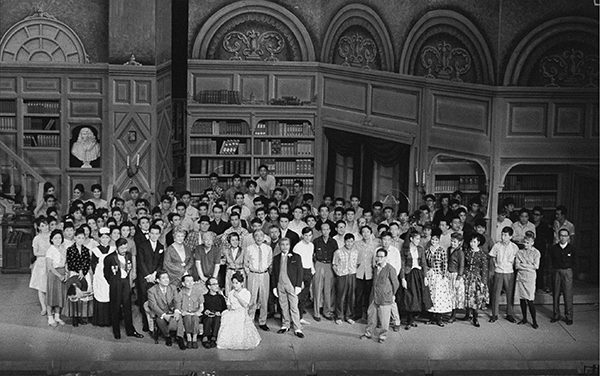 In February 1956, the first Toho Musical performed in two main stages, "Koisuredo Koisuredo Monogatari (Love in Love)" written and directed by Kazuo Kikuta, and "Nakibeso Tennyo (Whining Angel)" written and directed by Tadasu Iizawa. It was huge success with luxury casts such as Enoken, Roppa, Fubuki Koshiji, and Mariko Miyagi.
In 1957, Ichizō Kobayashi founded the Hibiya Geijutsuza for Kazuo Kikuta who was eager for "modern drama". The opening of new theater was Toho modern drama "Noren (short split curtain), held on April 25, originally written by Toyoko Yamazaki, scripted and directed by Kazuo Kikuta. Hisaya Morishige played the lead and his performance was huge success. However, never seen the opening of new theater, Ichizō Kobayashi end his life of 84 years. Kazuo Kikuta created numerous masterpieces such as "Gametsuiyatsu" "A Wanderer's Notebook" "Sad Toys" and "Yogisha no hito", and made many actresses appear on the Geijutsuza, in his chest with Ichizō Kobayashi's message that "The best entertainment that will be the mental food for customers... firstly the script is important, secondly script, then thirdly script".
In 1961, the movie "West Side Story" was released in Marunouchi Piccadilly and a big hit. At the time, there was a musical debate that people should not talk about musical without checking West Side Story, and it was said that Toho's musical was far from the real musical. Kazuo Kikuta, however, stood seriously for Japanese musical. He went to the United States four times during a very busy year. He was impressed by a piece of Broadway work while he had watched a various musicals. This musical matches Japanese people mind. He decided that it is worth performing this musical with all Japanese.
In September 1963, he performed Japan's first Broadway musical "My Fair Lady" in Tokyo Takarazuka Theater.
A total of 101 performers including Chiemi Eri (Eliza) and Tadao Takashima (Professor Higgins) are performing well.
"It is the performance that would be the dawn of Japanese musical.", the reviews were highly praised in each papers.
In October 1963, Nissay Theater was completed. The opening of new theater was German opera, and one year later, in November 1964, the "West Side Story" Broadway version by Americans came to Japan and performed.
In May 1965, Toho Musical International Performance "Hello Dolly" was performed in Tokyo Takarazuka Theater. A group of cultural mission from the United States Department of State visited Japan. The leading Mary Martin stood on the Takarazuka Theater. "Broadway came to Hibiya." the musical fans were very happy.
But it was only for a limited number of people. 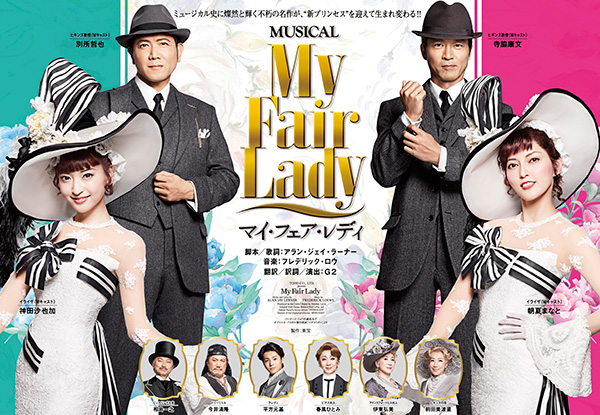