We will deliver Japanese review and musical unique to Takarazuka Revue! 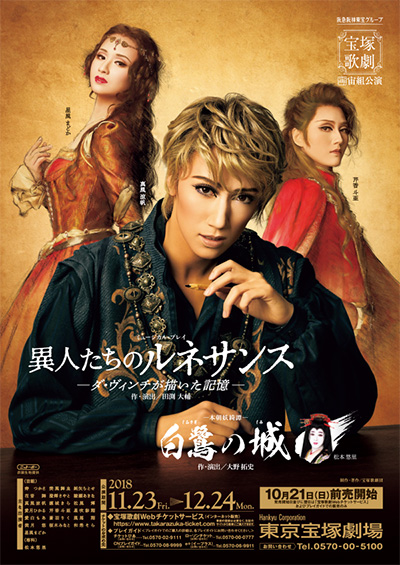 The last performance in this year by Tokyo Takarazuka Theater is the two works such as "Outsiders in the Renaissance - Memories Painted by da Vinci -", which depicts the love and hate of Leonardo da Vinci had called versatile genius and the people around him, and Japanese Revue 'Shirasagi no shiro' unique to Takarazuka Revue and performed by troupe of Cosmos.
You may imagine Western style performance of Takarazuka Revue, however, Japanese style revue is one of the traditions of Takarazuka Revue. It is a work that we would like to see by foreigners. Please visit this opportunity.

The confrontation, that had began in the capital of decadent Heian, between light-skinned prince Yasuchika Abeno as yin-yang master and Tamamonomae as yoko(fox spirit) that charmingly mislead people, has been fought for years and in various places, then comes to the end at the dynamic castle "Shirasagi no shiro" finally. It is a Japanese revue that portrays the fate of yin-yang master and fox spirit sometimes gracefully or bewitchingly, that they have transmigrated, fought, and been fascinated each other during 1000 years.

Leonardo da Vinci who left many mysteries in his life while praised as a versatile genius. Assuming that the source of his creation was love for a woman, they depict a love and hate between da Vinci and the people around him.
Florence, Italy in 15th century. Lorenzo de' Medici, the ruler of the city who blossomed Renaissance art in the city, showed great skill in military and diplomacy, deepening his confrontation with the Pope. Young Leonardo da Vinci is also one of his artists receiving his patronage. da Vinci did not make the completion of the requested work, and he majored his unplanned creation so that Lorenzo annoyed with him. At that time, he knew that Lorenzo's mistress, Katerina, was his childhood friend. They always snuggle up to each other from the same circumstance as bastard child, and shared loneliness... however, now in the eyes of her beautifully grown, there was a mysterious smile as if she closed her heart.

What is the Japanese Revue of Takarazuka Revue?

Japanese revue that is composed all stages of all songs and dances and all performers disguised in Japanese costumes is a gorgeous and ingenious performance style cultivated by Takarazuka Revue in the long history. The greatest characteristic of the Japanese revue is that it expresses a Japanese taste in a Western style. Japanese dance is originally danced in the tone of Shamisen and "a pause", however in Takarazuka Revue it creates a unique brilliant world accompanied by western music and orchestra.
Japanese revue is unique to Takarazuka Revue that even those who are for the first time to see it can enjoy with their eyes, ears, and hearts. Please enjoy an exciting feeling that you can only get here at the theater.