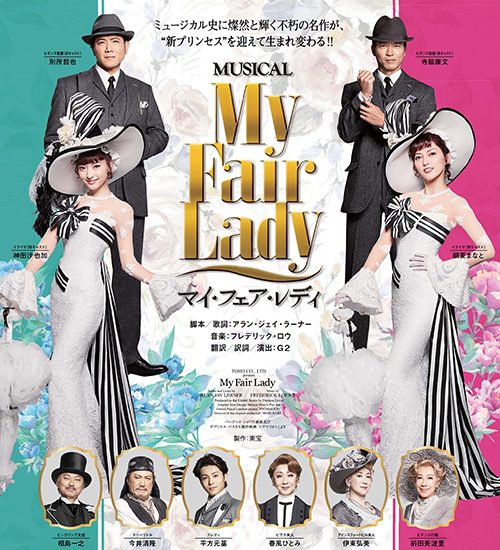 In 1966, "Gone with the Wind", which was a longtime dream of Kazuo Kikuta, was dramatized first in the world at Imperial Theater that had opened newly. It was a 10 months long run combined with the first part, second, and omnibus. With the success, the copyright holder, Ms. Kay Brown, approved on making musical stage of "Gone with the Wind" which Kazuo Kikuta's ambition.
January - March 1970. It was performed as a musical "Scarlett" at Imperial Theatre. Joe Layton, a choreographer and director who won Tony Award in "No Strings". Composer, Harold Roam, and all the staff including equipment, lighting, sound, costume design, arrangement, and leader, came to Japan from New York. The staff of directing section of Toho stage department learned well the progress of the musical at the training hall. The casts are Sakura Jingu-ji as Scarlet, Kin'ya Kitaōji as Rhett Butler, Jiro Tamiya as Ashley, Chieko Baisho as Melanie, and Tetsuko Kuroyanagi as Suellen, etc. In May 1972, the English version marked a one-year long run at Drury Lane Theater in London.
From 1963, a number of Broadway musicals such as "My Fair Lady" "No Strings" "How to Succeed in Business Without Really Trying" "Annie get your gun" "The Sound of Music" "The King and I" "Kiss Me, Kate" "South Pacific" "Fiddler on the Roof" and "Man of La Mancha" were translated and performed.
In March 1973, Toho Co., Ltd. won the 27th Tony Award, International Special Award. They performed American dramas (musicals) in Japan and was recognized for their contribution to spread among people.
Tony Award ceremony at the Broadway Imperial Theatre on March 25. On behalf of Kazuo Kikuta being ill in bed, Amamiya, the executive at that moment, attended the ceremony and received silver cup from an actress, Celeste Holm.
In the notes at that time "I wanted to have Mr. Kikuta attend. (omitted) The showy ceremony was a moment when the efforts of Toho's staff and actors with Mr. Kikuta who had continued their efforts for the musical performance activities since 10 years ago "My Fair Lady" bore fruit, and Kazuo Kikuta was most suitable to stand the stage than any other people. "
Mr. Amamiya went to Keio Hospital soon after returning to Japan. He reported to Kazuo Kikuta being ill in bed. He sat upright on the bed, had a silver cup of Tony Award with his thin hands, and he shed tears quietly, "That's good."
Four days later, a playwright, director, producer, managing director of Toho, Kazuo Kikuta ended his life of 65 years.
In 1975, in commemoration of Kazuo Kikuta's achievements, Toho established the Kikuta Kazuo Theater Award for the development of theater circles. It is now sponsored by the Movie Theater Culture Association.
Every year, they select and give the awards to the artists who have demonstrated their excellent achievements on the stage.