Check out the best masterpiece of the musical by Kunze & Levay in Imperial Theater! Musicals by Original works of Shūsaku Endō "Marie Antoinette" 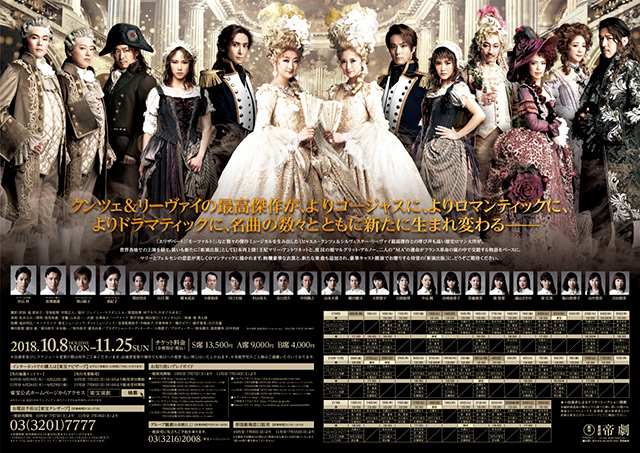 The history roman big piece, being expected as the best work of Michael Kunze & Sylvester Levay, who have created many musical masterpieces such as 'Elizabeth' and 'Mozart!', will reinvent Japan again in October and November to Imperial Theater, as a "new performance version" after performing in various places in the world. The tragic love of Marie and Fersen is depicted beautifully and romantically based on the story that the fate of two "MA", the queen Marie Antoinette and the common girl Marguerite Arno, are intermingling in the storm of the French Revolution. Please look forward to the long-awaited "new performance version" which will be presented in impressive cast competitive performance with gorgeous costume design and new music.
The Tokyo performance will be held from October 8 (mon) to November 25 (sun), and the ticket is now on sale with good reviews in Imperial Theater.

STORY
18th century, France. Under King Louis XVI (Takanori Satō / Yuichi Harada), the nobility of the upper class, such as Marie Antoinette (Mari Hanafusa / Rena Sasamoto), enjoyed a luxurious life with setting ordinary people, who suffered hunger and poverty, nothing.
At the luxurious ball at Palais Royale, Marie, boasts the overwhelming beauty, enjoys the meeting with her concubine, Sweden baron, comte Fersen (Mario Tashiro / Yūta Furukawa). Then, she bumps into a poor girl, Marguerite Arneau (Sonin / Natsumi Kon), and Marguerite appeals to the people's miserable life and asks for help, but she just gets mocking smile. Marguerite feel heat to the nobles who do not look at the poor people at all, but only think about themselves, so seek free world without poverty and fear, and start on the path to the French Revolution.
Marie is busy for pursuing cutting-edge fashion with hair dresser, Leonard (Hajime Komada), and costume designer, Rose Bertin (Mao Ayabuki). However, even when Boehmer, jeweler, had tried selling an expensive necklace studded with countless diamonds, she had do decline as the national budget had been tight.
Around the same time, Duc d'Orléans (Mitsuo Yoshihara), revolutionaries poet Jack Hebert (Kenji Sakamoto), and Margueritte, broadcast fake scandal about the Queen, then Duc d'Orléans had his eye to Boehmer's necklace and caused a famous "Affair of the Diamond Necklace" by the trickery. The ripples gradually spread, and the public's anger and hatred against the royal family reached a peak, but the king and queen did not hear about the caution to the revolution.
Eventually the wave of revolution came to Paris, and the king family became captive with his friend, Princesse de Lamball (Kanami Ayano). Margrueite was sent to the Revolutionary Party to monitor Marie, but eventually they found each other's truth.