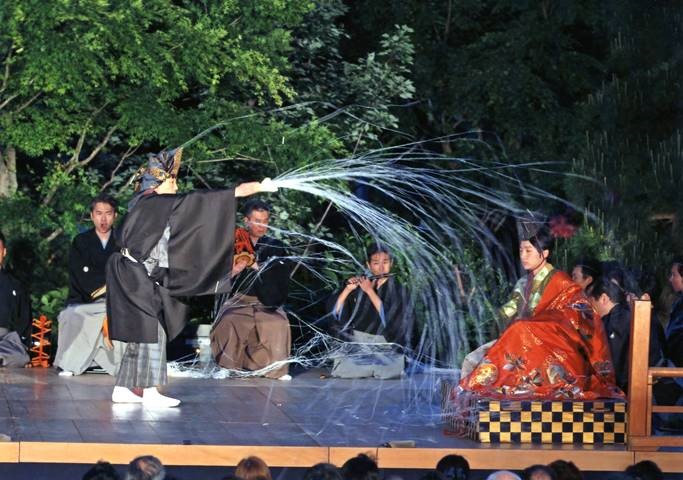 It was a little long name, but it started with a survey by a technical committee member, passed through the Council of Cultural Properties to report, and was endorsed that 'It is the cultural property equipped with the facility and formality for performing Nogaku, which is designated as a national performing art'.

There has been an interesting phenomenon that cultural heritage structures coexist in the cutting-edge complex building where luxury brands and restaurants in Ginza, being center of Tokyo, gather passing through space and time of 700 years.

Kanze Nogakudo was selected as a "unique venue" from the Tokyo Convention and Visitors Bureau. It is a word often heard recently, the meaning of "Special (unique) venues (Venus)", and the objectives are that events and reception are held in historical buildings such as museums, gardens, temples and shrines to produce special sense and regional characteristics. The idea originally started in Europe, and it is said that the Natural History Museum in London uses it about 160 times a year.

The Tokyo Convention and Visitors Bureau selects 38 places in Tokyo as unique venues. In the area of Tokyo Art & Live City, Hamarikyu Onshi Teien and Tokyu Plaza Ginza are selected besides Kanze Nogakudo.

In Kanze Nogakudo, government agencies, local governments, and private organizations are widely used for PR, as Japan Tourism Agency sponsors the "Instameet" that invites instagrammers to disseminate Japanese culture to the world.

It was especially a hot topic that the Japanese team participating in Google's 'lunar exploration race' announced a press release in Noh stage. The Japanese superimposed the spirit to Moon on realization of their dreams and sent a message to the world from Kanze Nogakudo.

Kanze Nogakudo has been sending new messages with conservative attitude to protect traditional culture and innovative flexibility to disseminate Japanese culture to the world, by following the genealogy of the head family of Kanze for 700 years.

On May 4 and 5, the first Takiginoh in Ginza was held on the rooftop of GINZA SIX. Bonfires are burning in the sky of sunset, and Noh "Ground spider" was performed on a special stage by the 26th head of the Kanze family, the eldest son Saburota, Yamashina Yaemon, and others.

In the best situation with the flames that scorched the dark night and trees and overlooking the illuminated Tokyo Tower, Spider monstrous being turning thousand threads produced a fantastic Ginza night. During the performance, the sound of the bell of Wako, which signaled the time, flowed into the night sky, and this also became a scenery of Ginza.
Toshiyuki Tanaka (Kanze-kai Councilor)