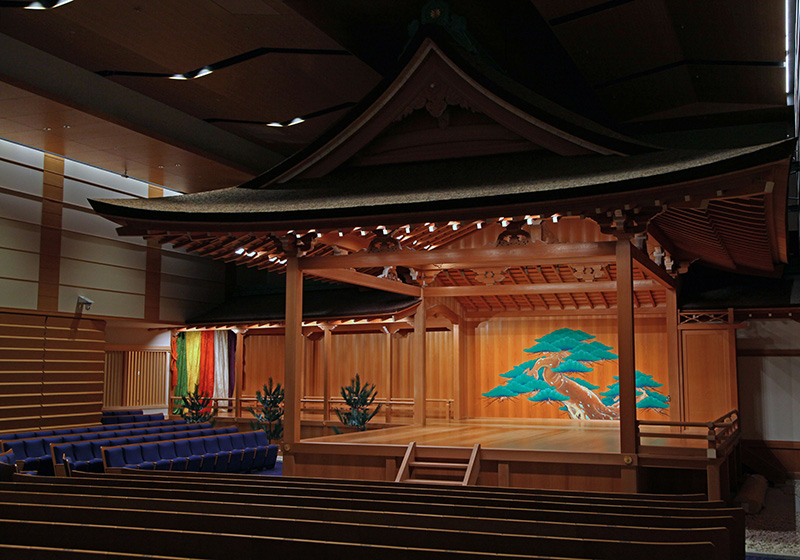 The relation between Kanze head family and Giza is old and goes back to the era of the tenth Dayu, Shigenari's area in Kanei 10 (1633).

According to "historical files", in the draft of Kanze Dayu, Seikyo, in Kyowa 2 (1802), there is a description of "bestowing a town mansion up to Yokocho, Nishiirie, 2-chomem, Kyobashi-minami, on unknown date in the tenth year of the Rooster", and the tenth year means 10th Kanei which tells the mansion was bestowed in the year from the third Syogun, Iemitsu-ko.

Minami-nicyome, Kyobashi is a place called Yumi-machi and it is said to be a place where bow and arrow craftsmen once had their homes. This is the area called the current Ginza from 1 to 2-chome, Gaslight Street.

According to essays of the 24th Sakon, the bestowed area was 524 Tubos (about 3.3 square meters) and the street in front of the gate was called Kanze Shindo. Although it is not possible to feel the atmosphere of the past, it is said that the residences of Noh actors who belong to the theater were around the house. It is said that Noh performances were also performed at the stage of the Kanze residences.

In addition, there used to be residences of Dayu of each group such as Konparu, Hosho and Kongo in the Ginza area. Kanze Dayu, who was in the position of the head of schools of Bakufu, served at Edo Castle from here.

On April 25, this year, the "ancient new year event" which reminds its history was reproduced in GINZA SIX's Kanze Nogakudo as a commemorative project of the first anniversary of opening by the 26 Kanze head family.

The ancient new year event was carried on since the era of Ieyasu Tokugawa as an official event of the shogunate on the New Year day. There used to be a solemn ceremony starting with "Four ocean waves" by Kanze Dayu, "Old pine tree" by Kanze Dayu, "Tohoku" by each Dayu of Hosho, Konparu and Kongo in turn, "Takasago" was sung by KIta Dayu, and then by the three major Dayus performed "Bow and arrow performed together" with a call of "Utaimase" by a call to start. at the presence of Shogun, the major three families and each Daimyo in Edo-jo Castle Honmaru front hall on the third day of the new year at about 18:00.

This time, the three head families of Kanze, Hosho, and Kongo appeared, and Shichizaemon Mogi of the former president of Japan Art Council played the role of a call to start.

A symposium was held to retrace Onami's contributions who was said to be a master of "skilled in his path or a skilled performer unlike", in the second part of the day, for his year marks the 620 anniversary of the birth of the third Onami, under the theme of "Samurai family Ritual and Noh".

Until return of the bestowed domain caused of returning of imperial rule to the shogunate, the Kanze residences were in Ginza, and had played roles as the main school of Samurai family style music.

"The romance of French and Japanese palace" expressed by Noh and baroque music: Is that sophisticated and gracefulness, or jealous pathos!?