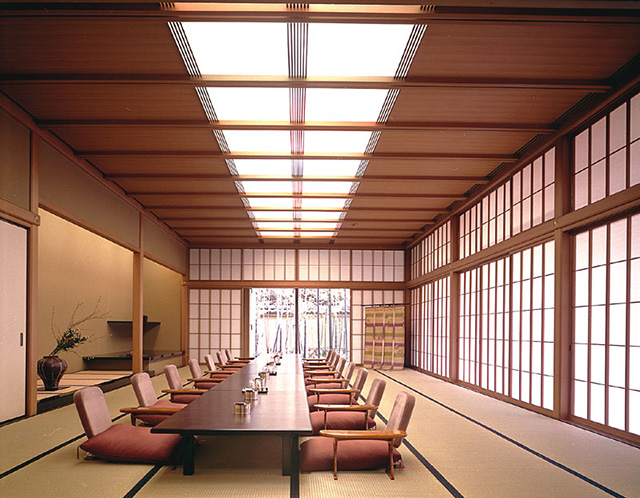 What is a Ryotei. I feel how to use the word is ambiguous. Serving food at a Japanese architecture, a place having special tasty sake, it is a good Japanese restaurant. Theoretically, what is dealt in restaurants? It is too shallow to call it a restaurant just because it deals food. Food is important for restaurants, but it is one of the elements. Consideration of the waitress progresses the banquet, greeting guests starts from cleaning, and hanging scroll, flower arrangement, and interior of the construction date back to the design. I believe that restaurants deal the atmosphere including various elements such as customer's condition and feeling.

Adding geisha (entertainment) to the restaurant makes ryoutei, Japanese high-class restaurant, this definition is easy to understand, isn't it? I would like to introduce it as a place where you enjoy dishes that have been developed in Japan with music and dance to people from other countries. It is easy to be understood by replacing delicious Spanish restaurant with Spain flamenco show, when comparing to Spain. Adding one difference that when the show completed, the ex-dancer becomes a facilitator of the banquet, which is added that unique to Japan.

Shinbashi karyuu world consisting of a traditional Japanese restaurant and geisha of the town, the name is derived from the stone bridge located in Ginza, the name of which is Shinbashi. The name of Shinbashi Station and place names derived from Shinbashi originate from the bridge, which has not been exist. Restaurant city means a area from Higashi Ginza to Tsukiji, the birthplace of geisha is around 8-chome of Ginza street, and Shimbashi geisha is geisha in Ginza. The Shimbashi geisha world originally invented at the end of the Edo period, developed in the Meiji period, has determined the characteristics of the town as the first-class arts. End of Taisho period when the town came to be called as the place of art, a Enbujo theater was constructed for the performance, and Azuma Odori, which originate from the construction, marks the 94th this year.

Music and dance in Japan, Japanese traditional music and dance now seems to be in far away. 10 years ago, Azuma Odori dance has transformed in 150th year from the birth of the city. Enbujo Theater, which is usually a theater, is used to resemble a Japanese restaurant temporarily. Ryotei 3 major elements are aligned in combination with the stage, by bringing our food and sake. Music, dance, food, good sake, paring, sweets with tea, and flower arrangement, beautiful and delicious Japanese things are gathering. Beginning of culture is enjoyment, and Azuma Odori dance, in which we enjoy Japan with the five senses, is the entrance of Japanese culture, which is usually distant.
(Shinbashi, Tokyo Voluntary association President Okazoe Shingo-restaurant Kanetanaka master)