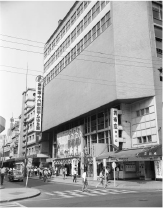 THEATER CREATION is a new theater opened in 2007. Its predecessor was a theater called "Geijutsuza", which theater may be more familiar to elderly people.

Geijyutsuza was opened in 1957, and for 48 years until 2005, it has produced numerous masterpieces that remain in theatrical history such as “The Greedy Old Skin" (Gametsuiyatsu), "Three old women" (San baba), "Raccoon dog" (Tanuki), and “Vagabond’s Diary " (Horoki).
Playwright, Kazuo Kikuta who served as a director in charge of the theater for our company at that time established this Geijyutsuza. Kazuo Kikuta had a policy of "artistry and popularity" in the production of theatrical plays. He created works that were highly artistic and widely accepted by the public, and as the result of them, they were very rich in variety at the beginning of the Geijutsuza, and sometimes many challenging works were performed. Not only original Japanese works, but also translations such as "The Miracle Worker" and "The Seagull" and overseas musicals that were not so many in those days were positively played. In fact, the Japanese premiere of the famous musical "Sound of Music" was played at Geijyutsuza in 1965. The leading actors were Kaoru Yodo and Tadao Takashima. As a very interesting work, the stage version of "Star of the Giants" which is said to be the beginning of Sports and never-give-up-spirit comic books, was performed in 1969, and Kichiemon Nakamura played the leading role. After this, many famous actors such as Isuzu Yamada and Mitsuko Mori added color to the theater, and in March 2005, the Geijyutsuza was regrettably closed the 48-year history due to deterioration of building. A theater with 750 seats in the full building. It was a very warm theater where the stage and the audience were close each other and everyone laughed and cried in one space.

And, 50 years after the establishment of Geijyutsuza, a new theater, THEATRE CREATION (611 seats), took over the spirit of Geijutsuza. All the beginnings of a play is to create. The act of creating produces people's imaginations. We focused on the very happy cycle of this "creation" and "imagination". The name of create is the root of the theater's name, and THEATRE CREATION, a theater named creation was born.

At the opening of a new theater, "The fearless Otojiro’s Company", written and staged by Koki Mitani was performed. The performance was featured Santamaria Yusuke, Takako Tokiwa, Keiko Toda, Masato Sakai, Masaaki Sakai and other casts, such a gorgeous cast. The opening series was followed by starring Mitsuko Mori " Vagabond’s Diary " (Horoki), and the Japan premiere musical "Rebecca". THEATRE CREATION declared to continue to resolutely perform toward the world with great artistic and popular works of all genres and countries.

June 2018, as of 11 years since the opening, 160 performances have been done, which is a wide range of works from straight plays, musicals, concerts to recitation plays, and has many audience enjoy every day. THEATER CREATION will continue to pursue the happy cycle of creation and imagination in the future based on the spirit of "artistry and popularity". We sincerely look forward to your coming to the theater.