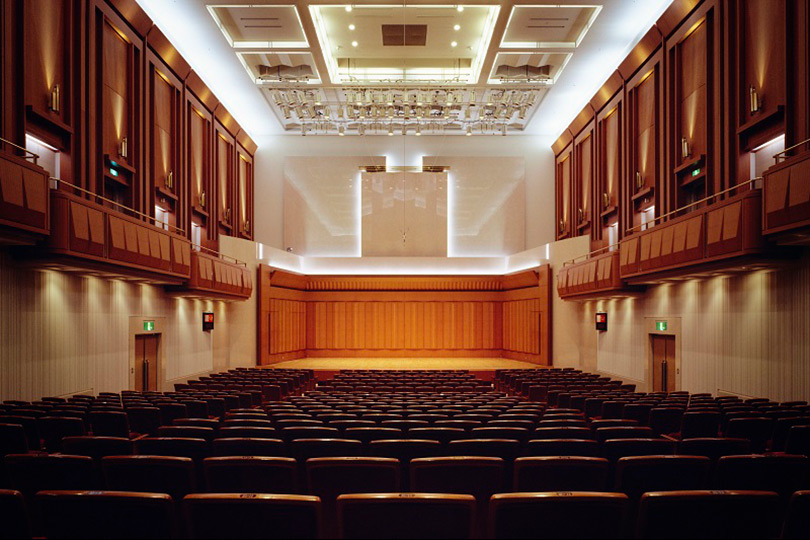 Upon entering the building located directly outside the entrance to the Tsukiji-Shijo Station, guests are greeted by stunning interiors, featuring marble floors and walls. The wall facing the entrance is made from a single slab of marble. At the top of the stairs, the landing opens on to a grand foyer that features plenty of open space and high ceilings.

Hamarikyu Asahi Hall is designed in a shoebox shape, following the classical standards of European performance halls, in order to create the highest-quality acoustics. Although the stage is built a level higher than the audience seats, the construction of the space allows the audience to still feel close to the performer, providing a sense of intimacy and immediacy for both performers and audiences. Accommodating nearly 550 people, guests can enjoy the performance equally from any seat in the venue. Aside from their main events, Hamarikyu Asahi Hall also hosts lunch concerts, which are held between 11.30am and 1pm. These concerts are quite popular among the locals and are a great choice for visitors looking to enjoy a cultural activity in the Ginza area.

Hamarikyu Asahi Hall is considered one of the world’s best acoustic halls, as recognized by the Acoustical Society of America in 1996. The Asahi Shimbun visited several concert halls before its construction in order to build the best hall in Ginza. The classical shoebox shape was chosen as the final design, because this particular style was found to best correspond to the needs of the audience and also to ensure good acoustics.

Leo Beranek (1914–2016), a renowned American acoustics expert, visited the Hamarikyu Asahi Hall in the 1990s, while working as an independent acoustical consultant in Japan. Beranek emphasized how important it was to pay attention to the acoustic sound quality when building a music hall, and Asahi Shimbun achieved this vision of excellence.

The materials used, the measurements of the area, and the stage depth were all taken into consideration for the construction of the hall. For instance, the walls below the balcony are covered by a marble-like material with a corrugated surface, while the rest of the walls and ceilings are composed of either gypsum board or wood. The vertical corrugations of the marble-like wall were added to balance the high-frequency sound waves and reflect them back into the reverberant sound field. Performers have also expressed how stage acoustics and sound are uniform in quality throughout the hall. As a result, the audience can experience beautiful sound quality wherever they sit.

Performances being performed or scheduled at Hamarikyu Asahi Hall