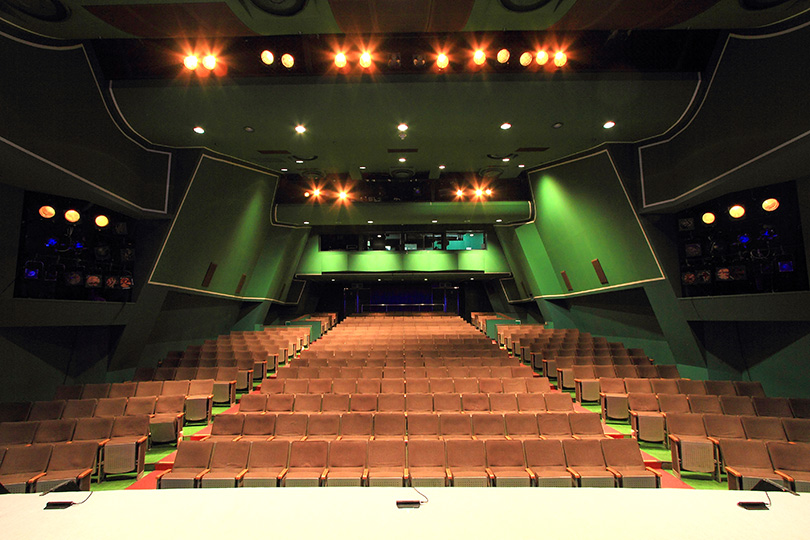 Located on the eighth floor of Hakuhinkan Toy Park at the heart of Tokyo’s theater district, the Hakuhinkan Theater greets visitors with evocative retro vibes: the lobby boasts red carpets, wooden ceilings, and Swedish crystal chandeliers. What makes the theater so special is the distance between the stage and the audience. The proximity of the stage makes it easier to feel immersed in the performance.
The theater, which seats almost four hundred people, began staging musical theater in 1978 when this artistic form was not very popular with the Japanese public, and today it continues to focus its energies on this genre, although space is also made in the schedule for dramatic plays, song-and-dance shows, concerts, stand-up comedy, and traditional rakugo storytelling. In recent years, the theater has produced original musicals featuring tap dancing as well as shows such as Ultraman, based on the Japanese science fiction television series by Tsuburaya Eiji about a superhero who saves the earth from aliens, and Sylvanian Families, based on the anthropomorphic animal figurines by Japanese gaming company, produced for children in collaboration with the Hakuhinkan Toy Park. Another highlight of its calendar is a science experiment show by Charlie Nishimura, in which he conducts several experiments such as an air cannon constructed from a PET bottle.

Tickets can be bought on the first floor. The building is at the corner of Ginza 8-chome and a three-minute walk from Shinbashi station.

Performances being performed or scheduled at Ginza Hakuhinkan Theater